For most people going to DMV is just a necessary part of registering a car. Some of the fun is getting assigned the six random numbers and letters with no special significance beyond cars identification and ownership. 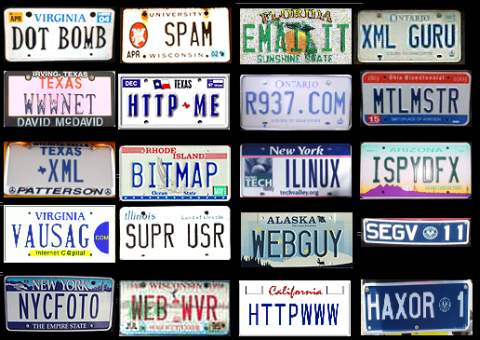 But for some, license plates are more than that. Driving along you can seen any number of combinations showing show loyalties to a team, a college, a band, political stand, humor, or simply plugging themselves. The possibilities are endless: 1 OFKIND, ALLLGOOD, GAMBLR…

It is believed that the first vanity plates were introduced in 1931 by Pennsylvania, though the messages were limited to their owners’ initials. Connecticut was next, in 1937, and allowed messages of up to four characters. Today they’re available in all 50 states and the District of Columbia and generate an estimated $200 million annually for state DMVs.

Whatever the message, vanity plates say something about the driver. Of the 242,991,747 registered vehicles in the United States, 3.82 percent (about 9.3 million) have vanity plates, according to DMV records from four years ago.  That’s 16 percent of the plates issued by Virginia, because they are the low price of ten dollars. New Hampshire came in second with nearly 14 percent. Illinois had about 13.4 percent, but that amounted to nearly 1.3 million plates, the most of any state. “If you’ve got 9.3 million people across the U.S. sporting vanity plates, you’ve got a cultural phenomenon,” American Association of Motor Vehicle Administrators spokesman Jason King said.

Penske fully supports this creative outlet. Penske Automotive Group feels that people just buy personalized plates simply because they want to tell the world they are special.  Vanity plates are ode to vehicle owners and they want to share it with everybody on the highway.

As for the people lucky enough to score vanity plates that convey just the right message, there are usually stories behind them. Tell us yours.