Roger Penske to be honored on “Legends Day” at Indianapolis 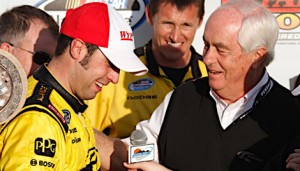 “The Indianapolis 500 and the Indianapolis Motor Speedway have meant so much to me personally as well as our race teams,” Penske said. “I am honored to celebrate the anniversary of our first Indy 500 win with the fans on May 26, and we look forward to an exciting race weekend.”

Penske will participate in a question-and-answer session with fans May 26 on the Coca-Cola Stage in the Pagoda Plaza, followed by a brief autograph session.

Other featured events on “Legends Day Honoring Roger Penske” will include the annual Public Drivers’ Meeting on pit road adjacent to the Tower Terrace grandstand, autograph sessions with the 2012 Indianapolis 500 starting field of 33 drivers and former Indy 500 drivers, and a huge Indianapolis 500 memorabilia show featuring vendors from the United States, Europe and Australia.

Admission to IMS on “Legends Day Honoring Roger Penske” will be $10 for adults, with children 12 and under free when accompanied by an adult.

“It’s fitting to pay tribute to Roger Penske, one of the true icons of the Indianapolis 500, on the 40th anniversary of his first victory at Indianapolis,” said Jeff Belskus, Indianapolis Motor Speedway Corporation president and chief executive officer. “His teams and drivers have set an incredible standard for excellence and professionalism at the Speedway, and Roger has become a landmark figure of the world’s greatest race. This will be a memorable day for fans and everyone who loves the Speedway in May to honor Roger.”

Believe It Or Not, One NASCAR Driver Tweeted From Inside His Car Just After The Juan Pablo Montoya Crash

AutoZone to Join Penske Racing in 2014