Team Penske Back to Defend Title at Sao Paulo 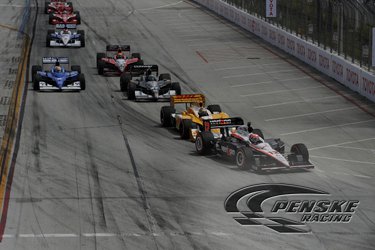 Back in Brazil: Team Penske returns as the defending champions at Sao Paulo after Will Power drove the No. 12 Verizon Team Penske Dallara/Honda to victory in last year’s inaugural IZOD IndyCar Series event in the city. In a wild race on the wide-open street circuit, Power passed Ryan Hunter-Reay for the lead with four laps remaining and captured the win in the series’ season-opening race of 2010.

Scenes from Sao Paulo: In addition to Power’s victory, Sao Paulo native Helio Castroneves and Ryan Briscoe also had interesting races last season in Brazil. All three drivers were involved in a multi-car accident at the start of the race and each dropped back in the field before making their way back up front. Starting eighth, Briscoe actually led four laps and looked to be on his way to victory late in the race before he made contact with the tire barrier. He returned to action and did finish the race in the 14th position. Castroneves, competing in front of his hometown fans, had to pit early for repairs and got caught out by a short rain delay before rallying to finish ninth.

After Three Rounds: Entering this weekend’s race, Team Penske is ranked second, eighth and 14th in the IZOD IndyCar Series standings. Power, who won Round 2 in Alabama, trails series leader Dario Franchitti by just seven points in the championship rankings, while Briscoe is eighth after a strong runner-up effort in Long Beach. Castroneves fell to 14th in points after a tough result in Long Beach that saw his car make contact with Power’s machine late in the race when both drivers were running inside the top-five.

Chasing 200: If Team Penske wins the pole Saturday in qualifying at Sao Paulo, it will mark the 200th all-time Indy car pole position for the most successful team in the history of North American open-wheel racing.

Remarkable Road Record: Team Penske excels at street course circuits. Castroneves, Briscoe and Power have all earned temporary road course victories over the last three seasons and the team overall has produced 22 poles and 12 wins at road/street course venues since 2007. This weekend’s race marks the fourth consecutive event held at a street or road course to start the 2011 season. The next race – the 100th anniversary of the Indianapolis 500 – begins a stretch of five consecutive oval races on the series schedule.

Legacy of Success: Team Penske continues to set the standard of success in open-wheel racing. Throughout its storied history, the team has posted 154 race wins, 12 National Championships and 199 pole positions. In addition, Penske Racing has won the Indianapolis 500-mile race 15 times. Across all of its disciplines, Penske Racing teams have produced 333 major race wins, 398 pole positions and 23 National Championships.

WHAT THEY ARE SAYING ABOUT THE ITAIPAVA SAO PAULO INDY 300

Helio Castroneves: “Racing in Brazil is always special for me and this weekend I am hoping for a great result for Team Penske. Being able to race in my home country in front of all the passionate Brazilian fans is certainly something very special to me. I look forward to seeing friends and family while I am down there and I feel really good going into this race, as our No. 3 Itaipava Team Penske car looks like a winner to me.”

Ryan Briscoe: “I’m looking forward to Round 4 of the IZOD IndyCar Series in Brazil. I think that this track can provide some of the most exciting racing with its long straights and heavy braking zones, which is great. The No. 6 Penske Logistics car has been really fast this season and I feel good going into this event. My main goal is to carry our momentum from Long Beach as we try to make up points in the championship race.”

Will Power: “I think this has the potential to be kind of a crazy weekend. It tends to rain a bit in Brazil, so track time may factor into the equation. I’m excited to race in Sao Paulo. The circuit has plenty of places to pass so if you have a fast car you will be able to get to the front. Our Verizon Team Penske car has been fast all year long and I am going to do my best to qualify well and hopefully get a good result.”