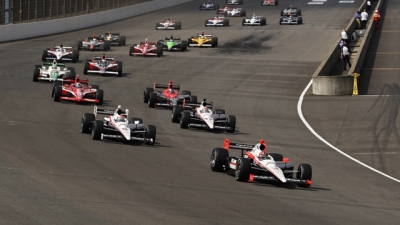 One of the loudest complaints from Indy car fans during the past few years has been the boring, strung-out, follow-the-leader restarts on oval tracks.

Starting with this year’s Indianapolis 500, two abreast restarts (aka NASCAR style) will be in vogue for the first time since CART tried it the late ‘90s.

“Roger Penske and Chip Ganassi say it works with NASCAR and creates better racing and that’s what we’re supposed to be about,” said IndyCar CEO Randy Bernard.

“I believe this is a very positive move that Brian (Barnhart, chief steward) is making and as it’s a lame duck year for the car and we promised our fans better competition and value, so this fits.”

Bernard intends to discuss the new restarts with the drivers and owners Tuesday prior to his State of Union press conference but his mind was pretty much made up after hearing from the fans for the past 10 months.
The drivers have been hearing rumblings about the new restarts for a couple months and many of them were against it.

“It’s going to be pretty wild, that’s for sure,” said Will Power, who captured the most victories (five) and finished runner-up in the IZOD IndyCar championship.

In addition, the restart zone on ovals will be moved up closer to the start/finish line instead of between Turns 3 and 4, another move to get the field more bunched up.

Another rule change, which should be positive with the competitors, is that pit selections will now be based on qualifying from the previous race instead of entrant points.

The way it’s been structured, the teams on top of the point standings were always guaranteed the last spot at pit out – a huge advantage.

Bernard is also expected to announce that the Edmonton race, dropped from the schedule because of conflicts with the city and the promoter, is back on for July 24th.

Octane Motorsports Events took over the financially-strapped but well attended event and originally balked at paying for circuit changes. The race was cancelled in early November but an outcry from city merchants and local race fans prompted a change of heart from the city council.