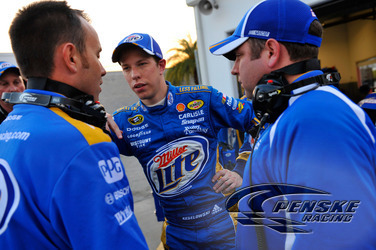 No. 2 Miller Lite Dodge Charger News and Notes
• This Week’s Charger… The No. 2 Miller Lite Dodge Charger team will use chassis PRS-736 during Sunday’s Subway Fresh Fit 500 at Phoenix International Raceway (PIR). This is a brand-new chassis to the No. 2 team.
• No. 2 Miller Lite Dodge in 2011… After one event, Brad Keselowski and the No. 2 Miller Lite Dodge Charger team sit 27th in the Cup Series driver standings and 29th in the owner standings after an accident ended the team’s day early in last Sunday’s Daytona 500.
• Keselowski at Phoenix International Raceway… In addition to his three career Cup Series starts at PIR, Keselowski has raced in eight career NASCAR Nationwide Series (NNS) events at the one-mile oval. In those races, he has recorded four top-five finishes and he has completed all 1,576 of 1,609 (97.9%) laps contested, with 68 laps led. Keselowski has also made two NASCAR Camping World Truck Series starts at PIR, with his best result of sixth coming in 2008 while driving his own Brad Keselowski Racing entry.
• The Rest is History… In the first start for Penske Racing at the one-mile PIR oval in 1991, Rusty Wallace qualified 10th and finished fifth. The organization has made a total of 56 starts at PIR with one win (Wallace – 1998), six poles and 13 top-five finishes.
• Follow Brad on Twitter… Fans can now follow Keselowski on Twitter at http://www.twitter.com/keselowski. Followers can get a glimpse inside his everyday life while keeping up-to-date on the latest news for the No. 2 Miller Lite Dodge team.

Brad Keselowski on Phoenix moving to the second race of the season
“I think we are in the middle of a pretty big evolution of the NASCAR schedule. It will probably continue over the course of the next several years. The people in Fontana are great and I’m sure that the track will work to make their date in late March a very successful one. NASCAR has a history in Southern California and we need to be in that region. That being said, it’s exciting to go to Phoenix for the second race of the season. The fans have continued to embrace our sport after they were awarded a second date a few years ago. At the end of the day, no matter where we race after Daytona, it’s important that we don’t have a letdown after our biggest race of the season. I’m confident that everyone on the No. 2 Miller Lite Dodge team is focused on this weekend.”

Brad Keselowski on how the “Blue Deuce” will perform this weekend at PIR
“I enjoy the challenge that Phoenix provides. It’s a very unique layout that has little – if any – grip. The track is worn down and it sits in that Arizona sun and just bakes, so it’s hard to get your car hooked up. But that’s part of the reason it’s so much fun to race there. It just seems like you are sliding around the entire race because it doesn’t take long for your tires to wear out. You really have to be smooth.  That’s what I focus on when I get there and I think anyone that runs well there does the same thing. It’s also really important to work with your crew chief to come up with a setup that is balanced and will work well with the asphalt at Phoenix.”

Crew chief Paul Wolfe on PIR
“Phoenix is a ‘compromising’ track because the two ends of the track are different. The main area we’ll work on is the exit of Turn 4. You need to have good forward bite off that corner so that you can beat everyone to the start/finish line and down into Turn 1. It’s a tough, old racetrack. It can be tough on driver and equipment, so you need to make sure you take care of both. But after this race we can pretty much throw out all of our old setup notes. The new repaving, which will include the addition of some variable banking in the corners, will basically make this a new racetrack. I like it how it is so I hope they don’t change it too much.”