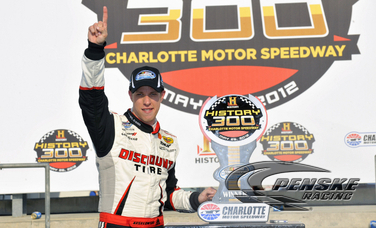 Brad Keselowski, driver of the No. 22 Discount Tire Dodge Challenger in the NASCAR Nationwide Series (NNS), picked up his first win of the 2012 season – the 18th of his NNS career – in the History 300 at Charlotte Motor Speedway (CMS) on Saturday afternoon. Keselowski stretched his last tank of fuel over the final 73 laps of the event to give crew chief Jeremy Bullins his first career win.

Keselowski began the 200-lap race from the 10th position based on his lap of 30.432 seconds, or 177.445 miles per hour, during the Saturday morning time trials. The green flag waved under hot, humid conditions that certainly affected the handling of the Discount Tire Dodge. Keselowski radioed that he was loose on corner entry, despite the fact that he was able to surgically make his way toward the front of the field. By lap 28, he was turning the fastest laps on the racing surface as he entered the top five. A lap 53 caution flag gave Bullins an opportunity to call his driver down pit road for a four tire stop that including air pressure and wedge adjustments. Keselowski restarted the race from the sixth position at lap 59.

The Discount Tire machine resumed its assault on the competition as he quickly made his way into second-place by lap 71. Keselowski radioed that the adjustments had a positive effect on the handling, but he was still dealing with a loose-handling condition on corner entry. A lap 111 pit stop, that included an air pressure adjustment, significantly improved the short-run speed in the No. 22 Dodge.

Keselowski made his final pit stop of the day at lap 127. Bullins elected not to make chassis adjustments and his driver restarted the race from the eighth position at lap 131. Bullins immediately instructed Keselowski to save fuel – a skill which Keselowski has mastered – as they were close to their fuel window. Despite doing as his crew chief instructed, Keselowski was able to assume the lead for the first time at lap 134. He was able to hold off the onslaught of the No. 18 of Denny Hamlin over the final laps to secure the victory.

The Memorial Day weekend victory is special for Keselowski and his work with his own Checkered Flag Foundation. Keselowski always carries the United States flag around the track with him following every win. The flag, including the one following Saturday’s victory, will be auctioned off to benefit the Checkered Flag Foundation and their goal of supporting those individuals who have sacrificed greatly for America, including military members, veterans, first-responders and their families, among others.

Following Saturday’s result, Keselowski and the No. 22 team moved up to sixth in the NNS owner point standings.

“You’ve got to be optimistic and you’ve got to believe in your people,” said Keselowski. “We’re doing all we can with this No. 22 Discount Tire Dodge program to bring in the most talented people we can and continue to give them promotions to Cup and so forth. You know, this program is our depth at Penske Racing. It’s great to see it for these guys. They deserve to get some results and the future that it beholds for them. I’m proud to be a part of that in some way.”

The No. 22 Discount Tire Dodge team will next compete at Dover International Speedway, with driver Parker Kligerman, on Saturday, June 2, in the 5-Hour Energy 200. Coverage will air live beginning at 1:30 pm EST on the ESPN. The race will also be broadcast on the Motor Racing Network and Sirius Satellite Radio Channel 90.