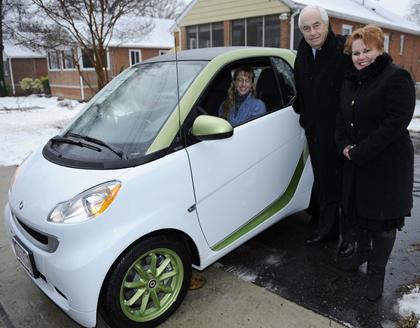 The car went to Army Maj. Mindy Kimball who lives outside Washington, D.C., and is a big believer in the potential for electric cars. The car is the same as the Smart minicar on the roads already, except this one is powered by batteries that allow it to go up to 98 miles between charges. In mixed driving, it is government-rated as having a 63-mile range. About 250 of these Smart electrics are up for grabs, but the next generation won’t go widely on sale to the public until 2012.

Smart USA says Kimball chose the Smart ForTwo electric minicar after checking out alternatives. She is a member of the Electric Vehicle Association and plans to display her new car at the 2011 Washington Auto Show.

“This is a groundbreaking day for Smart in the United States,” said Smart USA CEO Jill Lajdziak. “We are extremely excited to add the Smart ForTwo electric drive to the Smart product lineup, solidifying our position as a key player in transportation electrification.”