The slate of six finalists for AOL Autos’ Technology of the Year Award have been named, each embodying the latest and greatest developments in automotive fuel economy, connectivity, telematics and active safety. Readers will now be charged with casting votes that will help determine which entrant takes the top honor.

Following a careful review of over 40 entries submitted by industry professionals, editorial staffers and readers alike, the judging panel has declared the finalists to be (in no particular order):

From midnight on November 19 onward, readers will be given the chance to vote for one of the six innovative technologies to take the top prize. The announcement and presentation of the honor to the victor will occur in Las Vegas at January’s 2014 Consumer Electronics Show.

Though it is certainly true that most readers of AOL Autos will not have had a personal opportunity to test the technologies in the running for the honor, they do have access to reviews written by site staffers, all of which are accompanied by videos explaining the finer points of each innovation. These summaries also include specific articulation of the reasons each finalist was selected by the judging panel. Once the readers’ choice is determined after voting closes, that selection will have the equal weight to the vote of one of the judges on the 14-judge panel.

AOL Autos editor David Kiley believes that the readership will have sufficient information to fairly judge the merits of each new technology offering, thanks to the detail provided in the site’s presentations. Those assessments, combined with the hands-on experience AOL Autos staffers enjoyed with each finalist, make for a thorough, accurate judging process.

In its inaugural technology contest last year, AOL Autos tapped the updated UConnect system from Chrysler as the top technological innovation, surging ahead of laudable submissions from Cadillac, Honda, Nissan and Ford.

The fuel economy category was a new addition to this year’s contest, largely because it is an arena that is seeing a major influx of technological development within the auto industry. Kiley asserted that since fuel economy innovations are so thoroughly intertwined with electronics, the decision to include this sector in an event affiliated with the Consumer Electronics Show is entirely fitting.

Aim to Keep Your Focus… on the Road

Their main inspiration was the smart phone, and in Volvo cars they hope to replace buttons and levers completely with the touchscreen technology. They said some buttons and knobs may have a physical button – like the volume – but even those may mainly act as decoration.

There will be two touchscreens, one in the front center console for the driver, and one in the back for passengers. The screens will be able to communicate to each other by passing information along a light strip running from the front to the back.

Features included on the touch screen, which will be available on both screens, include entertainment, comfort, safety, playlists, etc. Drivers can get as many apps as they want, and can already choose from 6-7 Volvo apps.

To keep the driver’s hands on the wheel, there are touch-sensitive, translucent paddles that control the menus in the instrument cluster. A built-in camera also monitors eye movement so that when the driver looks at the touchscreen, it will light up, and as the driver reaches to use the screen, it will change to provide the controls the driver needs.

Volvo aims to keep the technology sophisticated, yet intuitive. However, some might prefer more traditional knobs and buttons because you can use them without looking. A flat screen, on the other hand, requires you to take your eyes off the road and onto the screen.

What do you think? 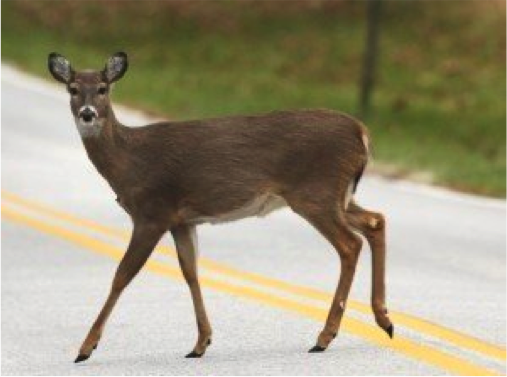 It’s a common scene: the deer in the road stops, turns and stares, eyes flashing in your high beams, and the screech of your brakes fills your ears.  For some, the brakes prevent what could have been a terrible accident.  Others are not so lucky.  Deer may look harmless, but they have cost Americans $3.5 billion in damages.

Who should come to the rescue but Volvo?  In recent years, the Swedish manufacturer has focused on increasing safety.  In 2010, Volvo introduced a system in the S60 sedan that brakes for pedestrians.  This system includes a lane departure warning and pedestrian detection.

Now, the company is developing an Auto-Braking safety system that will detect movement on the side of the road and brake when a collision is imminent.  Swedish automakers studied moose and deer movements and analyzed that data to develop their technology.  Using infrared and radar technology, your Volvo car will be able to pick up motion off the side of the road and help you stay safe.

Although the safety system won’t be implemented for a few years, the announcement comes just in time for the fall, which is the worst season for deer collisions.  October, November, and December are deer mating and migration season, making the roads even more dangerous.  The news will surely be on the minds of many as they’re driving through deer-populated areas.

Deer collisions have dropped in the past couple of years, but Montana is still sixth on the list of states that have a high number of deer collisions.  The odds of hitting a deer are 1 in 93.  Hopefully Volvo’s new detection system will help decrease those odds in years to come.

In the meantime, while waiting for this technology to be perfected and implemented, here are some tips for staying safe:

If you do hit a deer, pull over carefully and call the police or animal control.  Do not attempt to touch the animal.  Call your insurance company when you get home.

Always be careful when driving and stay alert!

Volvo revealed their Concept You at start of the Frankfurt Motor Show, and the new design has raised eyebrows – and questions – among auto enthusiasts and everyday drivers alike.

The goal of Volvo’s Concept You is to simplify the car’s interior, and dashboard in particular, while developing a sleek, clean design. In doing so, they have developed a car that leaps forward and introduces the next step in automobile evolution by utilizing smart pad technology and connecting drivers with the Internet.

The technology certainly is innovative. In Concept You, Volvo has wiped away the traditional car interior and replaced it with their control center, which consists of four interfaces throughout the cabin, one of which can be found right behind the steering wheel. Eye sensors detect when the driver looks down at the display, and the screen lights up, allowing drivers to see a variety of necessary information, like fuel, speed, etc, and also other helpful things, like a navigation map.

The control center interfaces are all touch screen; nowhere in this console will you find any knobs or buttons. Many have already raised the point that while those knobs and buttons might not look so pretty, they serve an important tactile function that allows drivers to press buttons while keeping their eyes on the road. With no tactile interface, will drivers be able to stay safe on the road? And while we’re on the subject, more questions can be asked about whether a driver should be fiddling with his car’s console if he should be focused on the road.

With that in mind, it is important to remember that the Concept You is just that – a concept car. It is a design meant to inspire future models, and in fact has no engine itself as it’s just an idea, and not in production.

The screen behind the dashboard is a needed improvement and helps keeps drivers focused forwards, instead of constantly turning their heads to see their GPS. Furthermore, only passengers will be able to use most of the extra connectivity features while the car is in motion.

The Concept You’s fascinating new features offer an exciting look at what cars of the future might look like. The integration of the Internet with touch screen technology is a bold move. Should we be connected to the Internet in our car? What are your thoughts?