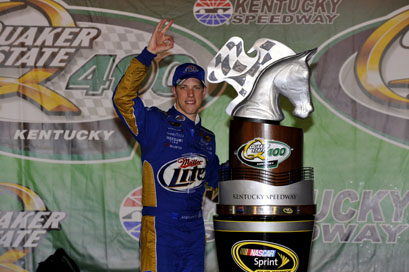 What could have been a devastating blow, ended up being a curious blessing.

Driving his backup, Keselowski raced to his series-leading third victory of the year Saturday night, grabbing the lead with 55 laps remaining and holding off all challengers in the NASCAR Sprint Cup race at Kentucky Speedway.

“It wasn’t the newest car we got, but it runs,” Keselowski said.

The 28-year-old from Rochester Hills, Mich., picked up his seventh win in his five years on the circuit. He won earlier this year at Bristol and Talladega. He gave all the credit for the latest victory to his team.

“They put together a backup car from last year in 100-degree heat in one hour’s time to get me back on the track,” he marveled.

Kasey Kahne rode a late surge to second place, 4.399 seconds back of the winner.

So well was Keselowski running that Kahne, despite his fast finish, knew he needed help to catch him.

“I just hoped he’d run out of gas,” Kahne said, grinning. “No way I was catching him. We had stopped (for a fill-up) and I was hoping he’d shut down.”

Crew chief Paul Wolfe called the quick turnaround in cars “probably the toughest weekend our team has ever had up to this point.”

“I’m just really proud of everybody on this team, to pull out a backup car after having that crash on the first lap on the track just says a lot about all these guys,” he said. “To be able to have a backup car that is capable of winning a race says a lot.”

While registering his 16th career top-five finish in the 267-lap race, Keselowski, who led for 68 total laps, ended a lull over the past four starts where he had failed to crack the top 10.

He was driving his backup car after slamming the right side of his top car into the wall in the wake of a collision with Juan Pablo Montoya during practice Friday.

He admitted that he felt he had been “pushed around” by Montoya on the practice lap and reacted angrily. He hinted that maybe he channeled that anger into the big race.

“It’s a great day,” he said. “When you know you’re locked in where you’re going to race for really long time, it’s a good feeling. Those guys (at JGR) have given me a championship-caliber racing team.”

A year after severe traffic congestion resulted in thousands of angry fans, there were few glitches after the track and government officials widened ramps and roads and added 20,000 parking spaces.

Defending champion Kyle Busch dominated for most of the first half of the race before he bumped into the wall and a broken shock absorber dropped him off the pace.

“We salvaged a heck of a finish for what all we had to go through,” said Busch, who ended up 10th.

With an uncharacteristic white paint job on his Chevrolet, pole-sitter and five-time Cup champ Jimmie Johnson led at the 200-lap mark but fell back all the way to 11th due to a flat tire. He rebounded to sixth.

“Up front in clean air that thing was blistering fast,” he said of his car. “I got back in traffic and just couldn’t go anywhere.”

Matt Kenseth, in action for the first time since announcing that he was leaving Roush Fenway Racing after the season, surged late to place seventh. Rounding out the top 10 were Martin Truex Jr., A.J. Allmendinger and Busch.

Kenseth maintained his lead in the season point standings by 11 points over Earnhardt. Keselowski is 10th.

Suddenly, Keselowski was getting questions about whether he might be able to make a run at the season title.

“We just have to keep winning,” he said.

Yeah, but with which car?

Team Penske excited to be back in Toronto